Wooo! It’s time for another fab I Heart the Cart sale and hunt! I’ve made two brand new things – the first is the vicious table (picture above).. because haunted wood makes fiesty furniture.. just make sure it doesn’t dine on you! Hunt about the sim to find it for 2L – and here is the full prize list from the official blog.

Also new is the latest in my collage-type pictures (below) – because I can’t get enough of Halloweenie puns.

You can find this picture on my cart, along with a free gift and some 10L items. I’ve resurrected a few old favourites that had yet to be rebranded, and it will probably be a while before they’re added to the store, so grab them while you can.

And as always, enjoy the fantastic sim and atmosphere <3
TAXI to the cart sale and hunt landing point

It’s been a while, but I’m back! I was delighted to be invited to the latest Stuff My Inventory Hunt – I have fond memories of being a part of one of their Unknown hunts showcasing new creators back in 2013 (as by Chiana Oh) when I didn’t even make my own mesh. I was also delighted to also sponsor this hunt – with the sponsor fees being donated to Latch – the Welsh Children’s Cancer Charity.

After an extended break from building, in which I also moved house in RL, it seems appropriate that my first event this year has a nostalgia theme as it lets me look back and take stock a little. As a late Gen-X-er, my nostalgia is mostly 80s-90s based, and for an October hunt, I had to find some way of making it all about the ‘ween, so turning Dracula into RADcula was the obvious choice.. or something. I mean, immortal beings do probably follow fashion trends to fit in, even if they are undead creatures of the night? Right? Now I can’t get the image of a monster in a shell suit out of my head… the RUSTLING alone would alert any prey 🤣

Anyway.. the framed picture also comes with the four pumpkins pictured with their appropriate 90s-squiggle patterns and garish colours. I hope you enjoy!

You can find all of the prize previews and hints over on the official blog here.

TAXI to my store where my prize is hidden.
HINT – Bats are bodacious! 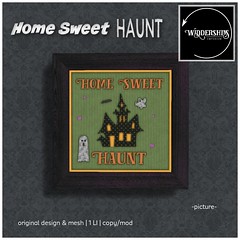 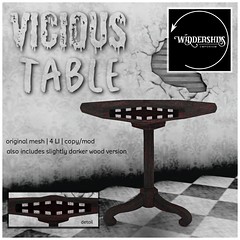 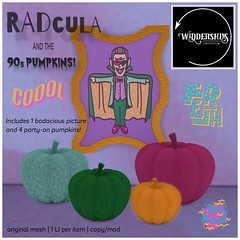 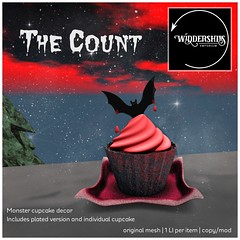